Main entrance of the Jokhang at Monlam Torgya 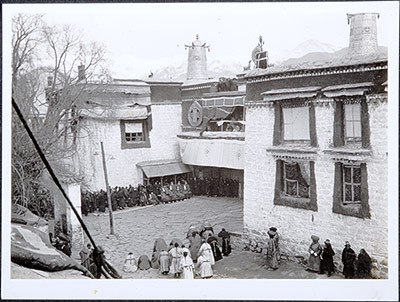 A view of the courtyard in front of the main entrance to the Jokhang temple in Lhasa. The courtyard is paved with flag stones of irregular shape. There is a lamp post on the left of the photograph. There are monks and monk officials in the background against the north wall of the courtyard and lay people and monks are prostrating in the direction of the Zurchong room to the north of the court where the Dalai Lama would be seated watching the proceedings. Members of the Kashag are seated on the verandah of the reception room, the Khamsum Tsomchen, over the porch of the Jokhang. The event is most likely to be Casting out the Votive Offering for the Great Prayer (Monlam Torgya) which used to take place on the 24th day of the first Tibetan month. The four monks seated on a bench below the window of the Dalai Lama are the Shengos, proctors of Drepung monastery. This photograph is probably taken from the Doring house on the Barkhor.

Notes on album mount - "Cathedral" is written as the general caption below two of the photographs on page 21 of the album in pencil in capital letters. [KC 2/1/2006]

Other Information - Setting: Hugh Richardson writes about the ceremony of Monlam Torgya in Ceremonies of the Lhasa Year , 1993, London: Serindia Publications, pp. 39-51. "The ceremony of te Monlam Torgya is the longest and the most spectacular of the New Year celebrations. It is the high point of the Yaso's tenure of office and the day for which the Tsisher was the preparation. It brings together religious and secular elements and marks the formal end of the Monlam Chenmo. ... The centre of the activity is the forecourt of the Jokhang where it can be seen by the Dalai Lama from a window curtained with yellow silk in the Zurchong room to the north of the court. The Kashag watch from the verandah of the reception room, the Khamsum Tsomchen, over the porch of the Jokhang."