Sungchora Square in front of Kashag with Potala 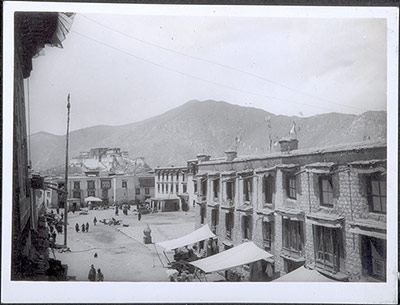 View of the Potala from the south west. The paved square in the centre of the image is the Sungchora Square which was one of the largest squares in Lhasa and was on the south side of the Jokhang Temple in front of the Kashag. The Prayer flag on the left is the Kesang Darchen which was positioned in front of the house of the 7th Dalai Lama's family, the Yabshi Sampho. In the centre of the image an insense burner (bsang khang) can be seen. The house seen immediately below the Potala is the Doring house. The awnings on the right are above stalls selling foodstuff.

Manual Catalogues - [Hugh Richardson in conversation with Roger Croston, detailed in H. Staunton undated Related Documents File, PRM Manuscript Collections] "The south side of the Jokhang, in front of the Kashag"[KC 17/10/2005]

Contemporary Publication - A similar image taken by Spencer Chapman is reproduced in Lhasa: The Holy City (between pp.176 - 177) with the following caption, "A Lhasa street. Notice prayer-pole on left, and, in centre, incense burner and paving in front of Kashag building. Potala in background, and Holy Mountain (18,500 ft.) in distance". There is also a description of the square in front of the Kashag on p.155, "To the south of the cathedral is the main square, which is used as a market place. To the north of this square - and therefore built right against the Cathedral - is the Kashag, the meeting-place of the Tibetan Cabinet,from which its name is taken. Here also is the Government Treasury and other official buildings. For some distance in front of the Kashag the ground is set with square cobbles,and there is a large insense-burner. It is here that the Dalai Lama, or Regent,preaches a sermon to the people on the occasion of the Tibetan New Year." [KC 17/10/2005]

Other Information - Related images: see 1999.23.2.16. This is almost exactly the same view taken at the time of the New Year