Eastern courtyard of the Potala at Gutor 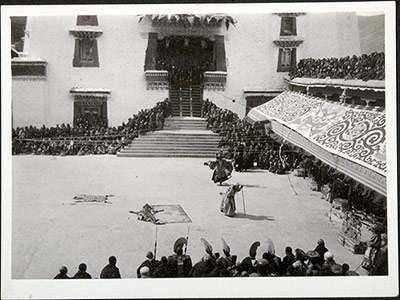 Ritual New Year dance in the eastern courtyard, Deyang shar, of the Potala. This is probably the occasion of the Votive Offering of the twenty-ninth day ceremony (Tshe gutor) which takes place on the twenty-ninth day of the twelth month immediately prior to the New Year.There are two animal skins on the ground in the centre of the image beside which a black-hatted dancer is dancing and a masked dancer with a stick is standing. There are crowds of onlookers surrounding the dance area and a line of monks with curved hats and staves used for crowd control at the bottom of the image. There is an appliquéd awning on the right for the musicians. The shadows suggest that it is midday.