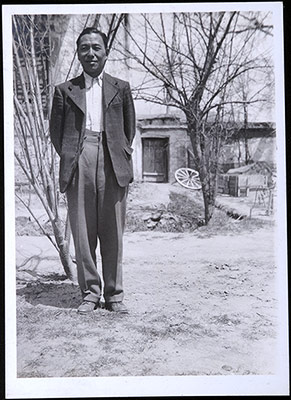 Rai Sahib Tonyot Tsering, Harry Staunton's Sikkimese S.A.S (sub-assistant surgeon) standing in front of the single-storey British hospital building with a cart-wheel leaning against a wall and packing cases on the right-hand side. He is wearing western style clothes and shoes.

Notes on album mount - "Rai Sahib Tonyot" is written in pencil in capital letters beside the photograph on the album page. [KC 30/12/2005]