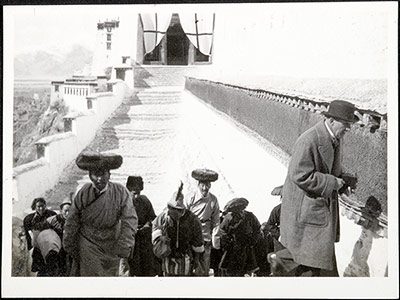 Tibetan officials and Silkkimese servants with Basil Gould carrying a cine camera and wearing a bowler hat on the right ascending the outer stepped ramps of the Potala for the installation of the Dalai Lama. The Tibetan official in the foreground on the left is Rai Sahib Sonam Tobden Kazi, Gould's personal assistant; the official in the centre background is Rai Bahadhur Norbu Dhondrup.

Other Information - People: Sonam Tobden Kazi was Basil Gould's personal assistant on this trip and became the British Trade Agent Yatung in September 1942 until August 1943 and again from March 1944. (Alex McKay, Tibet and the British Raj , 1997, Richmond: Curzon Press, p. 233)

Other Information - Setting: This image appears on an album page with the general title, "Installation of the Dalai Lama at Potala, Lhasa, Feb. 1940". However, I suspect that together with 1999.23.1.15.1 it was taken on the 1st day of the 1st Tibetan month (Feb 9 1940) when, "On February 9th the members of the British Mission, alone of foreigners, were priviledged to witness the religious celebration of the New Year in the main hall of the Potala." (Basil Gould, 1957, The Jewel in the Lotus, 1957, London: Chatto & Windus p.217). The actual Installation or Enthronement ceremony ( Serthri ngasol ) began on the 14th day of the 1st Tibetan month (Feb 22). It would continue "for a several days in succession, and again after an interval for several more days [and the Dalai Lama] would occupy the Golden Throne, confer blessings and receive gifts." ( ibid. p.222) Further, "The Tibetan government proposed that the British Mission should attend with their gifts on the second day...[Feb 23]" ( ibid. p.223). The British Mission duly set off on this day, "at eight o'clock in the morning we set out, some fifty persons in all in uniforms of many kinds ... to the Potala. ... Rai Bahadur Norbhu was resplendent in the stiff brocade suitable to his rank as Dzasa and Rai Sahib Sonam in the golden robes of a Depon." ibid. p.227. Unfortunately, Gould does not tell us how he was dressed. I would expect him to be in full ceremonial regalia and not in a tweed overcoat and bowler hat. [KC 21/12/2005]