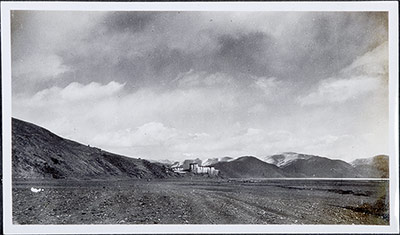 A distant view of Nagartse fort (dzong) with mountains in the background and storm clouds.

Other Information - Setting: F Spencer Chapman writes in Lhasa: The Holy City , 1940, London: Readers Union Ltd, p.60, "The rounded mountains on the left run down to a massive fort on a spur above Nangartse village which is separated from the lake by a mile or two of very green grass. ... The fort is most impressive with grim bare whitewashed walls, and a line of dark red along the summit." [KC 13/12/2005]