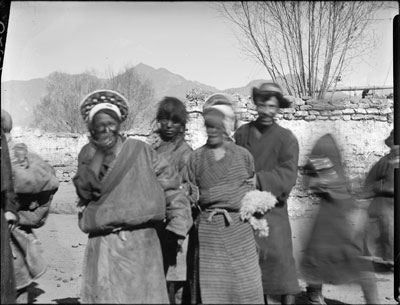 Two Changpa women and a Changpa man from the Changtang graziers

Other Information - Dates: A date range of February-March 1921 has been suggested for this image as it was most common to see Changpa and other minority ethnic groups in Lhasa during this time, as they were visiting Lhasa on pilgrimage, pay taxes and to participate in the ceremonies of the New Year. Image 1998.286.261 of a Changpa encampment has indeed been identified by Bell in his List of Illustrations as a camp established for Changpa people visiting for the New Year [MS 06/03/2006]