Magistrates of Sho in courtroom 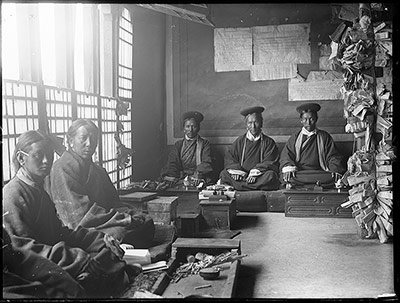 Other Information - Description: Bell's Diary entry for 26th July 1921: "I visited the Sho Le-Kung today (photo quarter plate). The courtroom resembled in the main that of the Mi-pon. There are three magistrates, known as the Sho-pa. Usually two are trung-khar and one a tse-trung, but at [?] all three are trung-khor. This courtroom, the one which I photographed, is up stairs. Down below in another place close to, is a verandah in which those accused of the more heinous offences are tried. Here are kept the whips and finger-crushing implements of the same kind as those used by the Mi-pons. Nearby is the prison with two separate rooms, both of which one sees from above. One, for those convicted of lighter offences, was photoed by me some months ago. it gets plenty of light and air from above. The other for heinous offenders, is dark, but gets much more light and air than the prison administered by the Mi-pons. Looking down through the grating of the Sho prison for heinous offenders, I could see though dimly, the prisoners inside" [Vol XI, pp. 58-59]