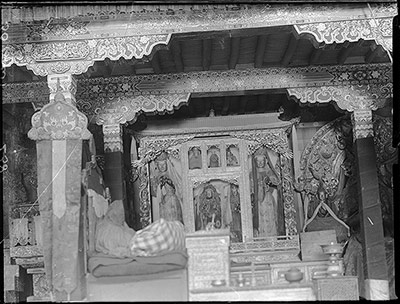 Altar in Assembly Hall of Shide Monastery, Lhasa. To left, Abbot's seat with Abbot's costume arranged on it.

Contemporary Publication - Published in 'The Religion of Tibet', Bell, C. A., Oxford: Clarendon Press, 1931, facing p.170:"Altar in Assembly Hall, Shi-de Monastery Lhasa. To left, the Abbot's seat with his dress arranged on it."

Other Information - Description: Bell's Diary entry for July 26th 1921: "[After visiting Sho courtroom] I paid a surprise visit to Shi-de Monastery. A service to Drol-ma is in progress, a service of praise and prayer, in which about 60 monks are taking part. We stand just outside the door and watch it. At the further end, near the main altar sits the Abbot, enthroned in his high seat. There is one Abbot only at a time; he holds office for 4 or 5 years. There are some ex-Abbots also in the Monastery. // A boy, aged about twelve years, kneels at the end of the row, nearest us in the door-way, with his back towards us. With head bowed down almost to the ground he recites passages from one of the sacred books in a low voice. He is passing an examination, for which he has studied for three years or so. When he returns to his seat, the service is resumed. There is much posturing of the hands and fingers in different ways, which I am told by the priest, who conducts us, represents the fashions [Tibetan script] after which the gods (lha) hold their hands and fingers. All seem to know what to do, and do the various actions in unison" [Diary Vol XI pp. 59-60]