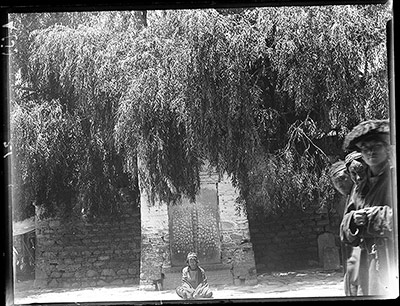 Smallpox edict pillar near Jokhang, in summer, containing instructions for segregation during smallpox epidemics. Person with hat seated in foreground and three people in right hand corner of image

Varnish Intensifier Notches on right side

Other Information - Cultural Background: Bell's diary for 30th July 1921:" Per Tsendron "The weeping willow trees are called 'Chinese willows' ( Gya chang ). Since the 5th D[alai] L[ama]'s death all the trees and flowers have frooped a little. The Cho U-tra over the Small Pox Edict in Lhasa, is a Chinese willow." [diary Vol. XI, p.65]