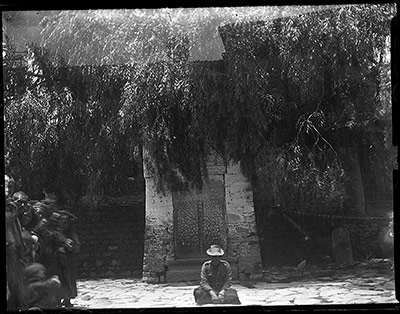 Smallpox edict pillar near the Jokhang, in summer, containing instructions for segregation during smallpox epidemics. Person with hat seated in foreground.

Other Information - Cultural Background: Bell's diary for 30th July 1921:" Per Tsendron "The weeping willow trees are called 'Chinese willows' ( Gya chang ). Since the 5th D[alai] L[ama]'s death all the trees and flowers have drooped a little. The Cho U-tra over the Small Pox Edict in Lhasa, is a Chinese willow." [diary Vol. XI, p.65]