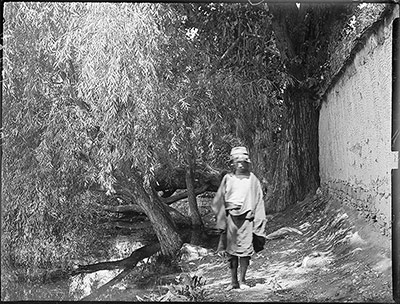 Man walking through willow trees in grounds of Lukhang behind the Potala; poplar tree on right.

Other Information - Dates: This photograph may have been taken on September 22nd 1921 as Bell wrote in his diary for that day only on the is the temple opened to the public - to visit at any other time than the 15th day of the 4th Tibetan month requires the special permission of the Dalai Lama [Diary Vol. XIII, pp. 1-5]