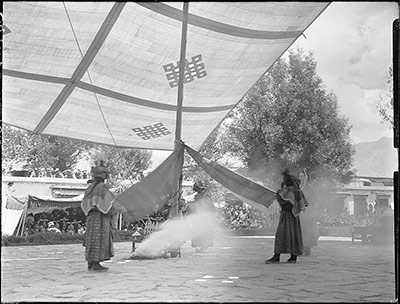 Kyormo Lungga troupe performing "Pe-ma-On-ba", the history of Lopon Rimpoche at the Dalai Lama's Ache Lhamo in 1921Above and to the left of the incense smoke is a torma of barley dough and butter.

Manual Catalogues - Bell's List of Illustrations entry: "[No. of chapter] XXXVIII. [Subject of Chapter] Folklore [Subject of Illustration] Q182 (d). Kyor-mo Lung-ga troupe performing "Pe-ma-On-ba", the history of Lo-pon Rimpoche. The latter goes to the country of the Devils with his mother. the mother is seen here half hidden by the incense smoke. She and the two fairies ( kan-dro-ma) in the foreground are performing a religious service before departing for the Devil country. Above and to the left of the incense smoke is a torma of barley dough and butter. [Remarks - handwritten in blue ink ] Not very sharp"

Other Information - Cultural Background: Bell's Diary for 16th August 1921:"I ask Shesur about the different troupes, and especially about the most popular troupe, the Kyor-mo Lung-nga . He replies, "There are altogether 15 to 20 performers in the Kyor-mo Lung-nga troupe of whom two or three only are girls; the rest are men. These girls are from about 15 to 25 years old; beyond that age women do not act. It is said that the troupe known as the Pim-dum-pa were originally seven sisters ... but now-a-days this troupe consists of men only. ... After the theatricals at Norbu Lingka are ended, a few of the troupes perform for a few days before some of the leading families of Lhasa. The other troupes then return to their cultivation. and are in rather a hurry to get away, because it will be about time to reap their crops by the time they reach their homes. But the Kyor-mo Lung-nga are poor and have no cultivation. Being the best at acting they give rather more performances than do the other troupes, and then split up into small parties and earn their livelihood by petty trading. The one who took the part of Ya-ma-ga-ti trades in the Lhoka province in wollen cloth ( nam-bu ); others in musk in Kong-bo, and so on. Before the seventh month comes round, they return to be coached by Ya-ma-ga-ti in the performances, which have to be given at Norbu Lingka and elsewhere during that month." [diary Vol. XII, pp. 20-21]