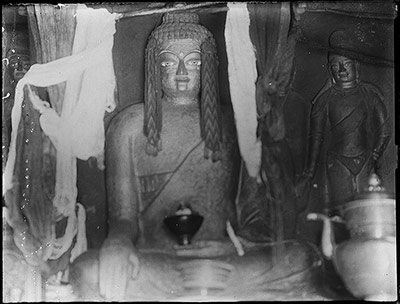 Image of Buddha in cave on Chakpori

Other Information - Setting: Bell's Diary entry for 1st September 1921: "Near the foot of the Chakpori hill outside Lhasa is a cave. In this is a stone image of Buddha, of rather more than life size. This is said to be an image which constructed itself (rang-chung) and to have been in existence before Lhasa was founded. At first the outlines of the form appeared on the rock in this cave. Butter lamps were offered, prayers recited etc. and gradually the image formed itself completely. The cave is a large one" [Diary vol. XII p.57]

Other Information - Description: Bell's Diary entry for 13th October 1921: "I visited the cave chapel on Chakpori. It is near the foot on the eastern face. The self-made image is of about life size, and it is gilded. The caretaker claims that if the image of the Cho in the Tsuk Lakhang should journey to another country this image would take its place and that this is recorded in the books. The cave is about 30 ft long by 20 feet broad and some 10 ft high. The caretaker points out a large number of stone images in it as self-made. A streak of white in the black stone is pointed out by the caretaker, who tells me that King Song-tsen Gam-po announced that, should supplies of salt in Lhasa become scanty at anytime, sufficient salt would be found here to meet the requirements of all. Rabden and Dawa Tashi orderly went around this cave chapel with me. Rabden has photoed the above-mentioned stone image of Buddha, which has the place of honour in the cave, facing the entrance." [Diary Vol. XIII, pp. 26-7]