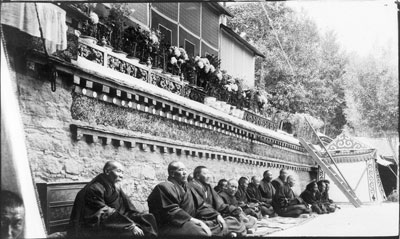 Zimgakpa and Secretaries watching the Dalai Lama's Ache Lhamo from below the Dalai Lama's tent. Officials seated on the ground in front of a stonework wall; architectural joist ends also visible; verandah above with potted plants, behind which is a curtained-off room in which the Dalai Lama would sit; a step ladder visible for gaining entry to the verandah from the front and a side-view of an ornamental tent in far right of the image