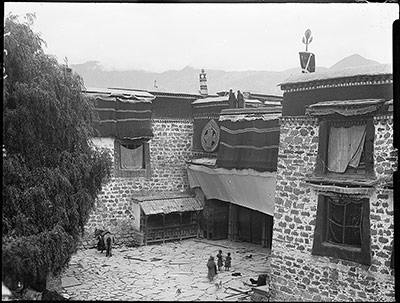 Entrance to Jokhang, Lhasa. Bell and Kennedy were able to view some of the ceremonies taking place here from the first storey window in the centre left of the image. Behind the yak curtain on the second storey is the verandah from which the Dalai Lama used to view proceedings. To the left is the weeping willow known as "Buddha's Hair".

Intensifier Lantern Notches on right side

Manual Catalogues - Bell's List of Illustrations entry: "[No. of chapter] XXVII. [Subject of Chapter] Amusements [Subject of Illustration] Q111 (d) Entrance to Tsuk La Kang, Lhasa. On left centre on first storey is the window from which we viewed the ceremonies and festivities that took place here from time to time. Behind the yak curtain just above is the verandah, from which the Dalai Lama used to view them, on the second story. To the left is the weeping willow known as "Buddha's Hair". [Remarks] L.130"

Contemporary Publication - Published in 'Portrait of the Dalai Lama', Bell, C. A., London: Collins, 1946, facing p.289 (top):"Verandah from which the Dalai Lama could view the ceremonies in the prayer festival."