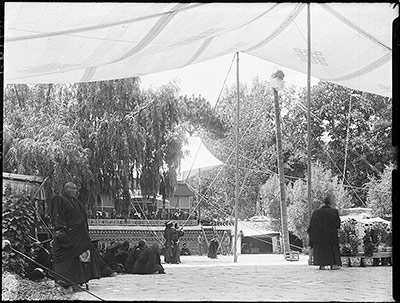 Ache Lhamo performance at Norbu Lingka. On the roof in background is the Dalai Lama's private stand with tent roof and wooden, latticed walls. Right middle distance, a long pole which an actor has climbed. In left fore ground and right middle distance are Zimgakpa, or monk body guards, who were often of great height

Manual Catalogues - Bell's List of Illustrations entry: "[No. of chapter] XXVII. [Subject of Chapter] Amusements [Subject of Illustration] Q108 (a) Ache Lhamo at Norbu Lingka. On roof in background Dalai Lama's private stand with tent roof and wooden-latticed walls. In front of it flowers in pots. Right middle distance a long pole up which an actor has climbed to the top. In left fore ground and right middle distance are Sim-ka-pas, the one in the left foreground is about 7ft high."

Other Information - Description: Bell's Diary entry for 4th August 1921: "[After the opening performance of the Ache Lhamo] Now two Sim-ka-pas and four Dro-nyens give katas to the performers. They stand in front of the stage, and one by one the dancers come to receive their scarves. The Sim-ka-pas are always very tall men but one of these is enormous, both in height and breadth, between 6ft 9in and 7ft. Kennedy says, judging by the protruding bones on his shaven head and other indications that he is suffering from acro-megale, ie: lack of development of the pituitary gland, which controls growth, and that he will not live long. He is a Khamba, 20 years old" [Diary vol. XII, pp. 73-74] [MS 10/8/2004]

Other Information - Dates: This image may have been taken on the 2nd day of the performance because Bell wrote in his Diary
of August 5th: "Yesterday the stage was uncovered; today a huge tent-roof of Tibetan design covers it" [Diary vol. XII, pp. 81-83] [MS 02/03/2006]