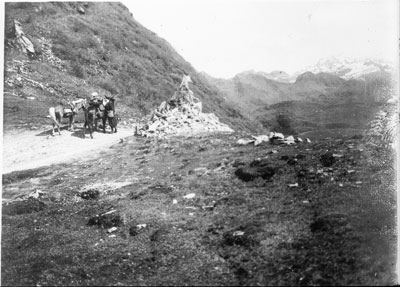 Contemporary Publication - Published in 'A Year in Lhasa' in The Geographical Journal, February,1924, facing p.92:"The Natu La between Sikkim and Tibet". This piece was derived from a lecture given to the Royal Geographical Society in London on 3rd December 1923 [MS 10/9/2004]

Other Information - Setting: Sir Charles Bell wrote of Na-tu La:"The route from Kalimpong to Lhasa passes through south-eastern Sikkim and crosses the frontier into Tibet via the Dze-lep La . Four miles to the north-west of this pass is the Na-tu La on the road to Gangtok, the capital of Sikkim." 'The People of Tibet', Bell, C. A., Oxford: Clarendon Press, 1928, p.113