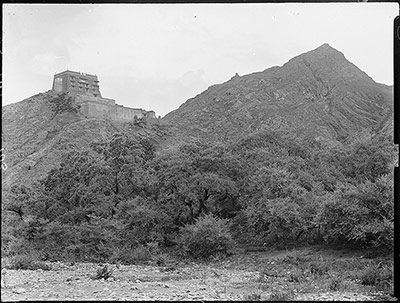 Other Information - Setting: "There is another Red Tomb [tomb in which embalmed bodies are laid to rest] at Lhun-trup Dzong, north of the Pem-po Valley, thirty miles from Lhasa. ... The year before our visit a miracle had happened. The people were rebuilding the Dzong , then almost in ruins. Close to it was a cho-ten , enclosing the embalmed body of the mother of him who had re-built Ta-lung Monastery when destroyed by fire. So the priest summoned the local deity after the manner of the Oracles and told him that they were going to repair the cho-ten also. But the answer came, 'Leave it alone'. // Soon afterwards the house, in which the cho-ten was kept, fell down. The cho-ten itself was broken, the corpse was uncovered and went rolling down the hillside, four hundred feet, over and over. When the people went to look at it, they were astonished to find that not only was the corpse uninjured, except for a cut near one of the ankles, but that the flesh on the body was as fresh as during the lady's lifetime. They found, too, that it was pure flesh, and not built up with clay, as is the regular practice. The body was carried up the hill again and is encased now in a fresh cho-ten ." 'The People of Tibet', Bell, C. A., Oxford: Clarendon Press, 1928, pp.296-7

Published in 'A Year in Lhasa' in The Geographical Journal, February,1924, facing p.101:"Lhuntrup Dzong". This piece was derived from a lecture given to the Royal Geographical Society in London on 3rd December 1923 [MS 10/9/2004]