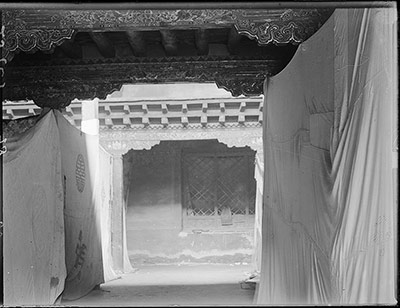 Manual Catalogues - Bell's List of Illustrations entry: "[No. of chapter] XXV. [Subject of Chapter] Travelling [Subject of Illustration] Q98 (c) Our rooms in Talung monastery (Diary August 1921). My room is behind curtain on left. Kennedy's opposite on left [ sic ]."

Other Information - Setting: At the end of August 1921, Bell and Kennedy made a short tour to the country north of Lhasa. Upon seeing the route to Talung Monastery, Bell became convinced that no other Europeans had previously visited this place [Diary for 26th August, vol. X11, p.36]. Bell describes his stay at the Monastery in his Diary for 27th August 1921: "There are three heads of the monastery, one being always a son of the house of Rakashar, one of whom is a living Buddha, known as the "Precious Mother" (Ma Rimpo-che), who holds the rank of Hu-tuk-tu. The present "Precious Mother" is a boy four years old. The three heads are nominally of equal rank, and the eldest of the three has the highest seal and wields the control of the monastery, but the "Precious Mother' has the highest reputation of all. // We visit the main chapels and halls. In one hall are an immense number of books piled up against two of the walls to a height of some twenty five feet, and in three or four layers, some ten to twelve thousand volumes, each in its massive wooden covers, some plain, but many carved on the edges - which alone we can see, - and inscribed with handsome gilt lettering. We are told that the books are all written in gold letters. These books were those that were saved from the big fire that destroyed the great Lha-Khang several hundred years ago. Consequently they are not put to further work, but rest in peace against the lofty walls. In other halls and in various chapels are other books also; in fact I do not remember to have seen so many books in any other monastery.// Another feature of this monastery is the number of large copper gilt images of Gotama Buddha, each about fifteen feet high, though in the usual seated position. There are half a dozen or so of these, denoting Buddha in various attributes, eg: as subduing evil spirits, and so on. // There are a large number of mausolea of the Ku-tung type, in which the bones of the deceased are kept, often mixed with clay and fashioned into images. Most of these are mausolea of deceased Rakashar Lamas, who held control in this ancient monastery. There are at least two embalmed corpses (mar-tung); one of the last Rakashar Lama, and one in a little chapel on the roof of the "Precious Mother" who died 7 years ago. Shasur says that the latter is almost pure flesh, very little clay being used in building up the body and features. The face is gilt-over; it is a thin, hollow-cheeked, kindly and somewhat careworn face. ... This evening Shasur brings me a message from the head of the Monastery that our cook, syres and other servants have paid them for the fuel, fodder, milk etc. supplied, but they do not like to take payment for these things. Will I mind if they return the money? They hope also that on my return journey I will stop at Talung. I hear next day that they have actually returned the money." [Diary vol. XII pp. 38-41] [MS 9/8/2004]