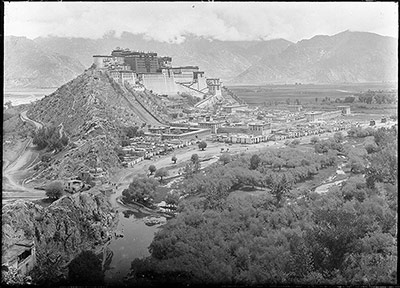 Potala Palace with Shö village beneath it seen from above and from the West, taken from Chakpori. On left Pargo Kaling, the Western Gate of Lhasa. Mountain tops in background covered in clouds.

Manual Catalogues - Bell's List of Illustrations entry: "[No. of chapter] V. [Subject of Chapter] Dalai Lama. [Subject of illustration] H82 (ac) Potala and Sho. In this view the hill tops in the background are covered with clouds; in (p) they are clear."

Contemporary Publication - Published in 'Portrait of the Dalai Lama', Bell, C. A., London: Collins, 1946, facing p.256 (bottom):"The Potala and village at its foot."

Other Information - Historical Background: The Potala Palace was built at the instruction of the fifth Dalai Lama during th 17th century. Its 13,000 square metres of interior space served many diverse functions, including: housing the Dalai Lama and his entourage, the Namgyal monastery, the government of Tibet and a school for religious officials. Its position on the Marpo Ri (Red Hill) emphasises the sense of the Potala as both fortress and sacred site, from where unwelcome guests could be surveyed, whilst pilgrims were inspired on their journey to Lhasa by the sight of this great edifice. The village of Shö serviced many of the secular needs of the Potala. On the left, Pargo Kaling, the Western gate of Lhasa, now destroyed [CH 03/04/2000]