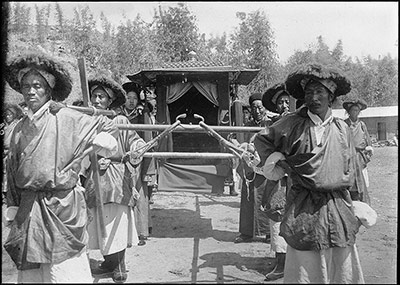 The Thirteenth Dalai Lama's state palanquin or pep-chang being carried in the annual procession from the Potala to the Norbu Lingka. Bearers and attendants surround the palanquin. It is not clear whether the Dalai Lama is inside the palanquin in this photograph, but the activities of the photographer do not seem to have met the approval of the bearers in this case, judging from their disapproving facial expressions