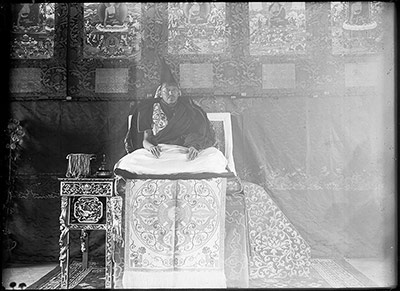 Manual Catalogues - Bell's List of Illustrations entry for H.77: "[No. of chapter] V. [Subject of Chapter] Dalai Lama. [Subject of illustration] H77 (v) Same as (u), but nearer view. Retouched"

In Negative - The emulsion of the glass plate negative appears to be silvering extensively. This makes it difficult to determine the full nature of the re-touching of the image that was undertaken. All of the glass plate negatives referred to above appear to have been extensively re-touched in a variety of ways to experiment with effects. All the effects play with the best means of enhancing the central position of the Dalai Lama in the darkened space, especially by adding highlights to his face. However, there also appears to have been use of special films overlaying the negative [as yet unidentified], removal of areas of emulsion and possibly painting in of domestic architectural features. The edges of negative glass plate 1998.285.89 have also been overlaid with tape to crop the image, apparently to re-enforce the centrality of the Dalai Lama in the scene. [MS 17/5/2004]

Other Information - Description: Bell describes this occasion in detail “I am to take the Dalai Lama’s photograph again ... the first time that anyone has photographed him in the Holy City (Lhasa)... The arrangement of the throne-room is not ready. I watch them arranging it. The throne is built up of two or three wooden pieces; the nine silk scrolls, representing the Buddha in the earth-pressing attitude, are already placed on the wall behind and above the throne... Below these scrolls red silk brocade covers the wall. The throne is four feet high, a seat without a low balustrade of beautifully carved woodwork running around it. Hanging down in front of the throne is a cloth of rich white silk, handsomely embroidered in gold, with crossed thunderbolts (symbol of equilibrium, immutability and almighty power) ... Chrysanthemums, marigolds and other flowers are arranged round the dais.” ( Portrait of the Dalai Lama, p.336)