Pilgrim on road to Lhasa 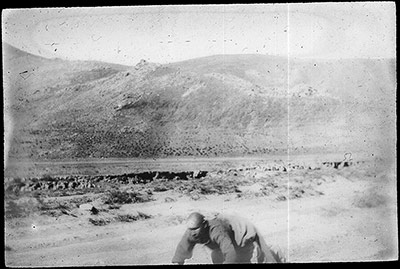 Pilgrim prostrating on road to Lhasa; valley in background

Notes on print/mount - '12' has been written in black ink. This slide seems to have been used as slide 12 in the lecture 'A Year in Lhasa', which was first presented at the Royal Geographical Society on 3rd December 1923. The text, with a lesser number of images, was later published in The Geographical Journal of February 1924. Bell may also have presented this lecture on other occasions about which we have no information at present. [MS 6/9/2004]

Other Information - Cultural Background: Bell's Diary for 20th October 1921:" Kennedy tells me that yesterday we met on the way near Nye-tang a man who had covered the journey by the prostration method all the way from Tashi Lhunpo, a distance of about 180 miles, which would be increased to 200 miles, when he reached Lhasa. It had taken him 3 months and 7 days to cover the 180 miles. He had an ulcer on his forehead, from the latter continually touching the ground. // Parkang Shap-pe told us in Lhasa that people sometimes travel by this prostration method from eastern Tibet to Mt Kailas ( Kang Rimpoche ). The distance must be about 3000 miles for a pilgrim from Tachienlu, and the journey, so made, would take about 7 years." [Diary Vol. XIII, p.39]