Fort, village and monastery at Dechen 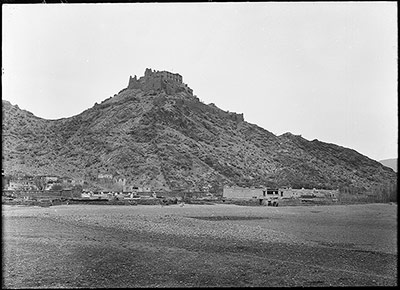 Ruined fort at Dechen, fourteen miles east of Lhasa. Settlement in foreground. Bottom right is the home of a 'wealthy peasant' where Bell and Kennedy stayed the night

Other Information - Related Images: In Bell's list of illustrations, the entries for H62 and H63 do not run consecutively, even though they are taken from an almost identical vantage point and seem clearly to have been taken consecutively. They have been re-ordered for the publication and/or lecture for which the list of illustrations has been compiled and the visual referents of the images have been re-coded as a result. 1998.285.67 incorporates both textually and visually a personal site of encounter in the 'peasant's house where we stayed', but this site has been cut from the scene textually in 1998.285.68, where the site becomes simply 'the village' [see notes for 1998.285.68]. It is not clear whether the peasant house has been cut from the scene visually as well, although 1998.285.67 includes an indistinct (domestic?) structure on the far right which may be the peasant house. This would locate Bell's named site of encounter in 1998.285.67 as being on the outer edges or exterior of the 'village' as defined visually in 1998.285.68. There is a lantern slide for H.62 (L.29) but not for H.63 [MS 14/5/2004]