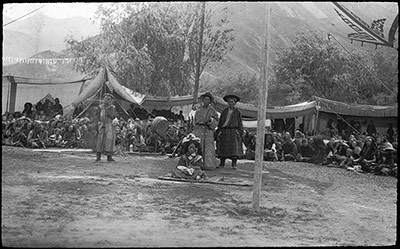 Manual Catalogues - Bell's List of Illustrations entry: "[No. of chapter] XXVII. [Subject of Chapter] Amusements. [Subject of Illustration] P.273 (bw) My Ache Lhamo in the Tsetrung lingka. The Magistrate of Re-nang, who is the left one of the two standing together behind and wears a yellow brocade dress like a modern Shappe's and a Shappe's hat, comes to perform the ceremony of marriage with Nang-sa, who sits in front under the pole. With the magistrate is his servant (right). [Remarks] L.146."

Other Information - Setting: Bell's Diary for 12th August 1921:"I gave a theatrical (Ache Lhamo) entertainment, lasting three days, to some thirty or forty of my Tibetan friends, the total number entertained including servants being 70 to 80. Tibetan custom prescribes that the servants of those invited shall also be fed. In addition to cups of tea, every half hour or so. Two meals are given daily, one about mid-day, and the other about five in the afternoon. Tsarong Shappe, Palha Kenchen and Ngar-po Shappe, who is related to Palhese, are very generous in lending me silk hangings, cups, cooking utensils etc. etc. // The entertainment was given in the Tse-trung Lingka. We, host and guests, sit in the Tro-khang; Kennedy and I with the Shappes and Dukes on the roof under a tent awning; the other guests in the verandah below. The Prime Minister is too unwell to come. The stage is outside on the grass. Round it in a semi-circle are arranged tents for the wives and families of the guests; and others also, of rank, pitch tents in line with these. Between these tents and the stage and in any available gaps, sit the populace of Lhasa, varying in number from five hundred to two thousand people according to the popularity of the performers (Photo). The Magistrates of Potala Sho have sent police, at the Tsendron's request to preserve order among the crowd, who may well become unduly merry later in the day. // Friday, Saturday and Monday were the days of the entertainment. A little rain fell on Sunday; but most fortunately, none on the days of the performance. It was very hot on the roof. The large tent awning over the stage (photo) was lent by the Sera Monastery." [Diary Vol. XI, p.89]