Bridge over Kyichu near Lhasa 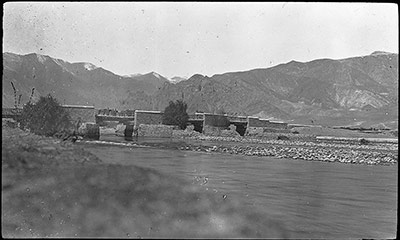 Notes on print/mount - '16' has been written in blue ink. These numbers seem to relate to a sub-set of the lantern slides which were used for lantern lectures on 'A Year in Lhasa' and 'The Dalai Lama'. This slide seems to have been used as slide 16 in the lecture 'A Year in Lhasa', which was first presented at the Royal Geographical Society on 3rd December 1923. The text, with a lesser number of images, was later published in The Geographical Journal of February 1924. Bell may also have presented this lecture on other occasions about which we have no information at present. [MS 10/9/2004]

Other Information - Related Images: The negative from which this lantern slide has been made is not in the PRM Collection [MS 24/8/2004]

Contemporary Publication - Published in 'A Year in Lhasa' in The Geographical Journal, February,1924, facing p.101:"Tolung Tresam". This piece was derived from a lecture given to the Royal Geographical Society in London on 3rd December 1923 [MS 10/9/2004]