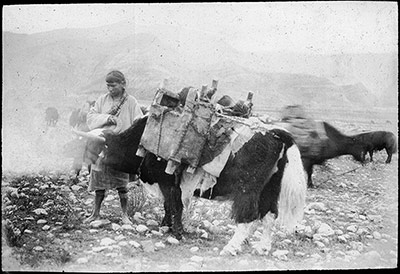 Yak carrying two small children, each in a box of yak-hide, on the four months' journey from Mongolia to Lhasa

Manual Catalogues - There is some confusion in Bell's List of Illustrations concerning the number attributed to this lantern slide '109' has been written in red ink on the lantern slide, but L.107 has been written against the entry for P.187 in the List of Illustrations. However, Bell seems to have confused his number series for slides L.107/8/9. The number attributed in the database reflects the number physically written on the object. Bell's List of Illustrations entry for P.187: "[No. of chapter] XXII. [Subject of Chapter] The Children. [Subject of Illustration] P.187 (g) Yak carrying two small children in 2 boxes of yak-hide - one in each box - on the four months' journey from Mongolia to Lhasa. (Diary XII, 69). The heads of the children can just be seen above the boxes. [Remarks] L.107"

Other Information - Description: At the end of August, Bell and Kennedy went on a tour north of Lhasa to Reting. On the way back to Lhasa on September 5th Bell comments on the following sight:"Shortly before reaching the camp at Lhun-trup Jong, - Kennedy having ridden ahead two hours ago, - I meet a party of men with yaks. they are on their way from eastern Tibet, a journey of from three to four months. Among the travellers are two small children, little more than babies, strapped into boxes of yak hide, one box on each side of the yak. The boxes are square, the sides of the hide being kept in place by pieces of wood, running vertically down the four corners. The little ones are placid, but happy (Photo 3)." [Diary Vol. XII, p.69]

Other Information - Cultural Background: On 26th August they encountered groups of people coming to Lhasa to trade and to make offerings. Bell commented in his Diary:"In one of the parties I see a baby, two years old, strapped on a mule. It has come a march of three or four months over the bleak Northern Plateau but its chubby cheeks and happy look seem to show that it is none the worse for the long and difficult journey." [Diary Vol. XII, pp.35-36]