A Golok woman and a Tsang woman in park in Lhasa 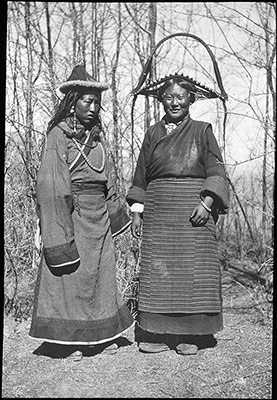 A Golok woman (left) and a Tsang woman (right) in park in Lhasa. Bell describes them as being 'two friends'. Both wear regional headdresses, coats, aprons and clothing accessories

Contemporary Publication - Published in 'The Religion of Tibet', Bell, C. A., Oxford: Clarendon Press, 1931, facing p.120:"Tsang woman (right) with a friend from a robber tribe."