Tibetan steel yard and a measure known as tre 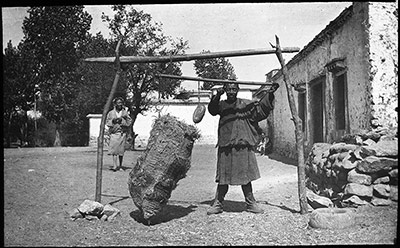 Tibetan steel yard (nya-ka) and a measure known as tre. Two men are standing outside a building; the man in the foreground is holding a bale of wheat suspended from a wooden pole and the measure seems also to be suspended from it; a wooden pole is suspended between two forked branches of wood, as if for hanging objects from it.

Other Information - Related Images: The negative from which this lantern slide has been made is not in the PRM Collection. [MS 23/8/2004]