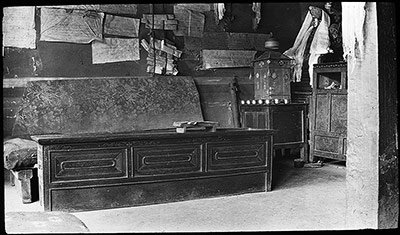 Contemporary Publication - Published in 'The Religion of Tibet', Bell, C. A., Oxford: Clarendon Press, 1931, facing p.140:" 'You will find his image sitting back against the wall'."

Other Information - Description: Extract relating to the court room in The Religion of Tibet , Bell, C. A., Oxford: Clarendon Press, 1931, p.139-40: "Sang-gye Gya-tso had governed the country for a very long time with rare ability. Capuchin missionaries who visited Lhasa forty years after his death paid tribute to his wisdom. In addition to his administrative acts, many - perhaps too many - books are attributed to him; a work on medicine, another on astrology, while a third embodies political discourses. If you visit the Police Court in Lhasa you will find his image there, sitting back against the wall, with the white silk scarves of ceremony placed reverently over his shoulders. In front is a holy lamp, fed by butter, in a frame of green gauze. Above the lamp is a prayer wheel of silk and paper, turned - of course in the right direction, i.e.: the way of the sun - by the draught from the flame of the lamp. these stand on a small square table, which here serves the purpose of an altar. In front of the lamp, seven small bell-metal bowls of water are alined [sic] . Thus does the great Regent receive divine honour in the heart of the administration which he did so much to shape." [MS 16/9/2004]

Other Information - Description: Bell's Dairy entry for July 13th 1921:"I visited the Lhasa Police Court, Mi-pon's Office, today with Palhese. It is on the upper story of a building in the Eastern quarter of Lhasa, and its lock-up is in the lower story of the building. As we enter through a largish rrom on the ground floor we see a number of cangues (heavy wooden boards for putting round the necks of prisoners,) lying against the walls. On the roof outside the Police Courtroom are various instruments of punishment or torture; whips with wicked-looking leather thongs; heavy stones for putting on the prisoner's head, so heavy that, says Palhese, the eyes bulge out; and small wooden bars which can be tightened or loosened at will with strong iron screws these being a Chinese invention for squeezing the fingers (Photos 3A). // I am shown a wooden grating down below on the lower floor. Below this is the lock-up, which is divided into three rooms, each with its locked door and devoid of ventilation or light except such as may filter through small chinks above the door. There are at present 17 under-trial prisoners. They are distributed among these three rooms. Some are in for a few days only. One has been in for three years, a man accused of murder whose case is not yet decided. From these black, airless rooms none emerge except when brought to the Court for further enquiry, an event which may happen once in a month or two, or not once in six months, as is the case with the three-year prisoner. For with him, though his case is not yet finally judged, the obtaining of fresh evidence is a rare occurrence. // I tell Palhese that three years in confinement in such a dungeon would kill most Englishmen, "and it kills two out of three Tibetans," he replies. "Does it not drive them mad?" I query. "Oh no, it does not do that," he replies in a surprised tone, as much to say, "Why should it?" Tibetans are free from nerves such as we know them. // The court room is a pleasant little room about 20ft long by 15ft broad, windows running down one of the sides for the greater part of its length. At the end of the room, furthest from the door, are the seats of the two Magistrate. These are the ordinary padded Tibetan cushions raised on a wooden framework about eighteen inches from the floor with the usual low Tibetan tables in front of them. The two Magistrates (Mi-pon) always sit together for the trial of cases. Lower seats, facing at right angles to them, down each side accommodate the clerks. The accused stands outside the window on the roof of the lower story. // To the left of the Magistrates is an image of Desi Sang-gye, the famous Regent of Tibet, who ruled the country during the time of the 5th D[alai] L[ama] and is said to have established this court as well as the Police court on Potala Sho (Sho Le-kung), which deals with cases from outside Lhasa town. In the Sho Le-kung the De-si's throne is preserved, but not used now-a-days. It is left as a memento and object of veneration. // In front of this image, which sits back against the wall, is a butter-lamp in a frame of green and gauze, surrounded by a prayer wheel of silk and paper, which is turned - of course, in the correct direction, - by the draught from the flame of the lamp. It stands on a small square table, which here serves the purpose of an altar, and in front of it are seven small bell-metal bowls of holy water. Even in a police court religious emblems are prominently present. // On the walls various letters and other documents are pasted. Some are applications from persons whose property has been stolen. They ask for investigation. Some are from receivers of stolen property, asking for an extension of time in which to pay the fines imposed on them. One, directly behind the Magistrates' seat is a scale of punishments ... Against a wall, jutting out into the room and facing the Magistrates' seat, are cupboards in which the more valuable records and books are kept. For instance, the income and expenditure of the court. Among the items of expenditure will be found not only the pay of the establishment but contributions which the Court has to make to specified monasteries. In the cupboard will also be found the orders of the Government, defining the jurisdiction of the court, papers of the landed estates from which they collect the revenue due to the Government, and are thus helped to meet the claims upon them. ... I took photos of the court room and of the instruments of torture." [Diary Vol. XI, pp. 32-7]