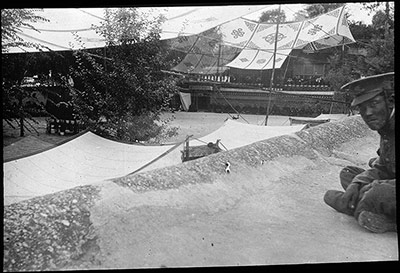 Ache Lhamo at Norbu Lingka showing the Dalai Lama's pavilion under awning and his personal staff seated on the ground in front of this at the front edge of the stage. A soldier, possibly one of the Dalai Lama's bodyguard is seen seated to the right of the photographer and is captured in the frame. The edge of the roof where the photographer is sitting is visible and this is the typical location for the Bodyguard to sit, overlooking the performance.

Manual Catalogues - Bell's List of Illustrations entry: "[No. of chapter] V. [Subject of Chapter] The Dalai Lama [Subject of Illustration] P.(ax) Ache Lhamo at Norpu Lingka showing D[alai] L[ama]'s pavilion (background centre) under awning and his personal staff (dro-nyers and sim-ka-pas) on the ground below it. [Remarks] Rosemeyer's L.neg:50 No number."

Other Information - Setting: The presence of the soldier who seems to be one of the Dalai Lama's bodyguard and the fact that the stage is covered with an awning suggests that this image was probably taken on the 2nd day of the Ache Lhamo performance, if it followed a similar structure to that of 1921 according to the description that Bell gives in his Diaries for the previous year. Rosemeyer went to Lhasa in 1922 as part of the team under Mr W. H. King that was responsible for extending the telegraph line. The negative from which this slide was made is not in the PRM Collection. It seems to have been made from a Postcard-sized negative [MS 20/8/2004]

Technical Information - This lantern slide seems to have been made with a slight double exposure as the awning seems to be ghosted on the left hand side. This and the fact that this is a slide made from a Postcard-sized image suggests that Bell may have been working from a Q-plate [Quarter plate] copy of the original, which was then used to make a contact exposure of the image on the lantern slide rather than projecting it through an enlarger. This seems to have been a reproduction procedure used quite frequently by Bell [MS 20/8/2004]