Dalai Lama's sermon in square outside 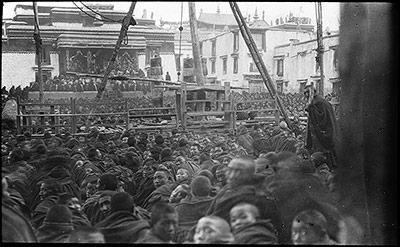 Dalai Lama's sermon on the 15th day of the 1st Tibetan Month. Crowds seated all around the square, with some of the crowd turning to look at the photographer. Crowds of monks are seated in the square whilst higher ranking Abbots, monks and officials are kneeling on the raised platform. A wooden structure with poles has been erected in the centre of the square

Manual Catalogues - Bell's List of Illustrations entry: "[No. of chapter] V. [Subject of Chapter] The Dalai Lama [Subject of Illustration] P.52 (ak) The Dalai Lama's yearly sermon in Lhasa in the early morning of the 15th of the first Tibetan month, during Prayer Festival. Pulpit in background in left centre. [Remarks] See Diary of Feb. '21. See also I, 18. L.49 (D.L)."

Other Information - Photographer: The negative from which this slide was made is not in the PRM Collection. It seems to have been made from a Postcard-sized negative. This size was not typically used by Bell during his time in Lhasa and it may be that this image was taken by Willoughby Patrick Rosemeyer in 1922 or subsequently. He used this image size and made many visits to Lhasa from 1922 onwards relating to the establishment of a telegraph line. The close proximity of the photographer to the crowd on this auspicious occasion suggests that it was probably not taken by Lt Col Kennedy either. Kennedy, as Medical Officer on bell's mission, was sometimes able to get closer, more intimate images than Bell, who felt the constraints of his official status. However, at this time there was a great deal of discontent in the large monasteries of Sera and Drepung, partly related to the presence of the British Mission, and it may be, therefore, that Kennedy would not have entered a crowd of monks at this time [MS 20/8/2004]