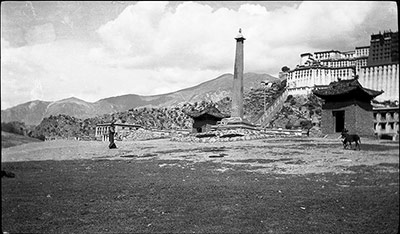 Doring or inscription pillar in front of the Potala Palace, Lhasa. Figure of a Tibetan man in middle distance observing the photographer

Contemporary Publication - Published in 'The People of Tibet', Bell, C. A., Oxford: Clarendon Press, 1928, facing p.14:"Obelisk engraved with historical inscriptions below the Potala Palace. In the small house on each side is a stone slab announcing a victory"