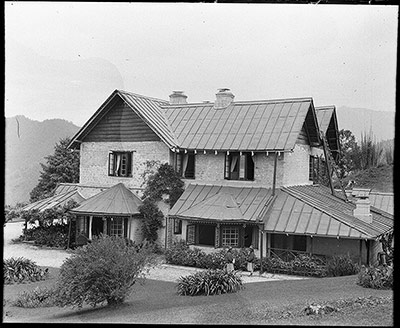 British Residency and gardens, Gangtok, in 1921. Closer view of Residency building with two Sikkimese orderlies standing in front of it; landscaped gardens visible

Manual Catalogues - No separate entry in Bell's List of Illustrations, but may be cross-referenced with H.6, for which the entry is: "[No. of chapter] 1. [Subject of Chapter] Sikkim. [Subject of illustration] H6 (q) The Residency, Gangtok, in 1921. [Remarks] L2 [lantern slide 2]"

Other Information - Setting: "Gangtok, the capital of Sikkim. During recent years this village on the mountain side, one of the world's smallest capitals, has acquired a share in the Tibetan trade. When I was in Sikkim, we arranged camping-grounds with fuel, fodder and water at convenient stages along the mountain tracks, a site for warehouses in the vicinity of Gangtok while the administration of the State was regularized more or less on British lines. So the Tibetan traders, who value just laws and a stable administration, even though of foreign make, have begun gradually to use Gangtok as a trading centre." 'The People of Tibet', Bell, C. A., Oxford: Clarendon Press, 1928, p.113