Camel ridden by Dalai Lama on return to Lhasa in 1909 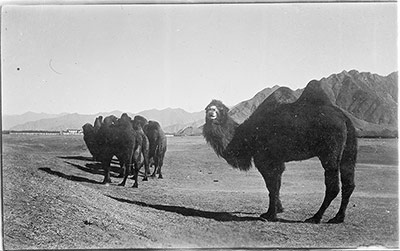 Four two-humped camels belonging to the 13th Dalai Lama. Used by the Dalai Lama to ride between Mongolia and Lhasa on his return in 1909

Manual Catalogues - Bell's List of Illustrations entry: "[No. of chapter] XLIII. [Subject of Chapter] The Fauna. [Subject of illustration] P.436 (gl) (a) Mongolian camels in Lhasa belonging to the Dalai Lama. [Where placed - book page] I,148"

Other Information - Photographer: Bell took photographs of the Dalai Lama's camels when in Lhasa as he states in his diary for March 23rd 1921: "We met the Dalai Lama's camels (3A photos taken), including one standing by itself on the embankment of one of the dry river channels; this one (photo taken 3A) is the camel which the Dalai Lama rode between Mongolia and Lhasa on his return in 1909. It is known as the 'Spirit of Abundance,' or 'Lord of Wealth' (Dzam-ba Lha)". However, '3A' refers to his use of a Kodak 3A camera in which he used quarter-plate sized negatives. This image, therefore, may have been taken by Lt Col Robert Kennedy who was part of the Mission in 1920-21 [MS 1/6/2004]

Other Information - Related Images: Although Bell states in his List of Illustrations that this image was published in Tibet Past & Present (Oxford: Clarendon Press, 1924), in fact a slightly different image, for which there is no negative in the PRM Collection, was used [MS 9/9/2004]