Hermitage between Talung and Phondo 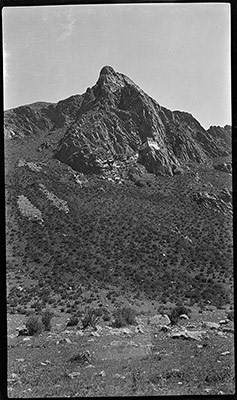 Other Information - Description: Bell describes this hermitage-monastery in his Diary for 28th August 1921, when he and Kennedy encountered it while journeying from Talung to Phon-do: "Four miles below Talung we see above us a dwelling with the familiar red band that indicates a house of religion. It is built into the face of a precipice (Photo 3A). Palhese tells me that it is the abode of a priest from Ri-wo-che in Eastern Tibet, a little on this side of Cham-do, the Ri-wo-che, which was at one time occupied by Chinese soldiers. He has taken up his abode here at the request of the Ta-lung monastery to whom the house belongs. It may be noted that he does not belong to the Kar-gyu or to the Geluk-pa sect, but to the old Nying-ma sect, an interesting fact, because it shows how the different sects can combine and work together. Being of the Red Hat sect, he is married and has children, for the rules of the sect permit this. But he has a reputation for learning and for sanctity. So parties of young monks, perhaps ten to twenty at a time, come and stay with him - sometimes for a few months, sometimes for a year or so, and carry the fruits of their instruction to their homes and districts, throughout Tibet. He tells these young priests what is virtuous, what sinful. He will read and explain the sacred books to them. Sometimes he will merely read without explaining, for, as he has attained a great height in religion, by his mere reading he gives them the blessing (known as [written in Tibetan script]) - which they could not gain by reading themselves. // Though married, he is a living Buddha (Tru-pe-ku), and at present at any rate, he leads an ascetic life, for he has remained seated, Buddha-wise, continuously for the last twelve months, so that now he is unable to stand upright. // A Lama's wife is known, not by the same designation as the wife of a layman - cham, kye-men etc, - but as "proprietress" ([written in Tibetan script] dak-mo). The Lama and his belongings are in her charge, so that he is free to devote himself to religion. Thus, marriage is, as it were, excused" [Diary XII, pp. 44-45]

Other Information - Photographer: Although Bell describes in his Diary [Vol. XII, pp. 41-46] taking a photograph of this hermitage when on a tour to Talung with Lt Col Robert Kennedy, this image size is not that usually used by Bell. It seems likely, therefore, that this image may have been taken by Kennedy and subsequently passed on to Bell for his reference [MS 24/02/2006]