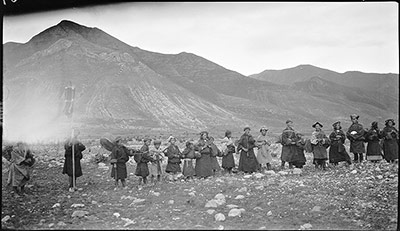 Villagers from Yatsa village, near Lhundrub Dzong, seeking blessing for good crops. The villagers are forming a line, and one man to the far end holds a flagstaff. The man next to him is carrying a musical instrument over his shoulder. Mountain range in the background.

Manual Catalogues - Bell's List of Illustrations entry: "[No. of chapter] XXXII. [Subject of Chapter] The Religion. [Subject of illustration] P.395 (dx) Inhabitants of a village near Lhun-trup Dzong, carrying the Buddhist scriptures round the fields as a prayer for good crops. (See Diary XII, 68). [Remarks] L.196"

Other Information - Description: Bell's Diary entry for 5th September 1921, in which he describes his journey (with Kennedy) from Talung to Lhundrub village in the Pempo valley: "On the way we meet the villagers of Ya-tsa village, going in procession around their village. One villager carries in front the banner of the district, and each of the other villagers carries a volume of the Buddhist scriptures. behind rides the headman of the village mounted on a pony (Photo 3A). The object of the procession is to ward off the frost and hail and is in fact a religious service to ensure that the crops which will be reaped in a few days time will be good. Shesur tells me it is a good omen to meet a religious procession of this kind" [Diary XII pp. 68-69]

Contemporary Publication - Published in 'The People of Tibet', Bell, C. A., Oxford: Clarendon Press, 1928, facing p.50:"Procession of villagers in prayer for the crops at Ya-tsa." The published image has been cropped down the left hand side compared to the original. [MS 10/9/2004]

Other Information - Photographer: This image was probably taken by Lt Col R. S. Kennedy rather than by Bell or Rabden as it is a different sized negative to that which Bell usually used. Kennedy seems to have used Postcard-sized negatives for taking photographs during his time in Lhasa [MS 24/02/2006]