Spectators at Prayer Festival in Lhasa 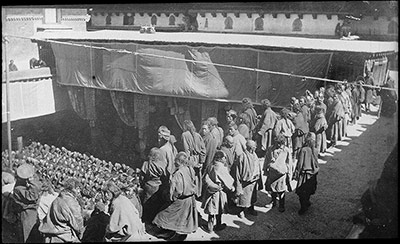 Group of spectators at the Prayer Festival in Lhasa looking down onto a courtyard in the Jokhang temple where a number of monks are seated.

Manual Catalogues - Bell's List of Illustrations entry: "[No. of chapter] XXXII. [Subject of Chapter] The Religion. [Subject of illustration] P.349 (gl) (bldu) The spectators [at the Prayer Festival] are in the gallery in the foreground to the right; the monks conducting the service can be seen in the well of the courtyard below to the left"

Other Information - Related Images: Bell has published another image from this occasion in Portrait of the Dalai Lama , Bell, C. A., London: Collins, 1946, facing p.289 (bottom) but taken from a slightly different angle. [MS 13/9/2004]

Other Information - Photographer: Bell did not use this sized negative for taking images in Lhasa. Therefore, the photograph may have been taken by Lt Col Robert Kennedy, who was part of the mission with Bell, or even by a Tibetan/Sikkimese photographer on his behalf, as Rabden for Bell. The image may also have been taken by Willoughby Patrick Rosemeyer, who visited Lhasa many times, commencing in 1922 as part of the group that installed the telegraph to Lhasa. Rosemeyer provided Bell with images from his time there and this may be one of them as he seems to have used Postcard-sized negatives [MS 24/02/2006]