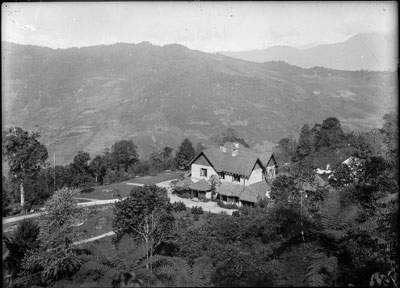 British Residency and gardens seen from above. Taken in 1921. Residency buildings and garden as seen from nearby hillside, also looking out into valley beyond

Other Information - Dates: In 1904 and 1906-1907 Sir Charles was temporarily in charge of the administration of Sikkim. He was made Political Officer of Sikkim, Bhutan and Tibet in 1908 and remained in this position until 1918, being based at Gangtok in the Residency. Some of the photographs in his collection were taken during this period. However, Bell returned to Gangtok when he left Lhasa, reaching the town on November 10th 1921 and it seems from his caption that this photograph was taken around that date [MS 21/9/2004]

Other Information - Description: "Gangtok, the capital of Sikkim. During recent years this village on the mountain side, one of the world's smallest capitals, has acquired a share in the Tibetan trade. When I was in Sikkim, we arranged camping-grounds with fuel, fodder and water at convenient stages along the mountain tracks, a site for warehouses in the vicinity of Gangtok while the administration of the State was regularized more or less on British lines. So the Tibetan traders, who value just laws and a stable administration, even though of foreign make, have begun gradually to use Gangtok as a trading centre." 'The People of Tibet', Bell, C. A., Oxford: Clarendon Press, 1928, p.113