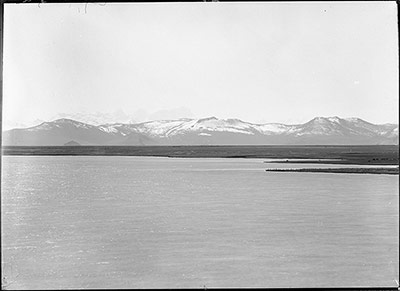 Yamdrok lake from near Yarsik. High snow covered mountains in background; mountain on right is Kula Kangri, which is more than 25,000 ft high

Bell's List of Illustrations entry for H.44: "[No. of chapter] III. [Subject of Chapter] Mountains, Rivers, Lakes, Climate, Rainfall and Trade Routes. [Subject of illustration] H 44(u) Yamdro Lake from near Yarsik. High snow mountains in the background. The one to the right being Ku-La Kangri, over 25,000 feet, that to the left, a nearer one apparently of very great height. This latter is not marked on the maps"