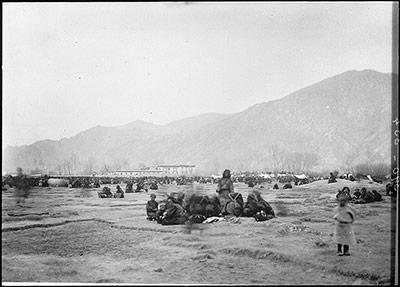 Picnic parties scattered over the ground in the New Year games at Lhasa. Lhalu Mansion in background. Crowds of people in foreground. Part of the 'Gallop behind the Fort' or Dzonggyap Shambe competition held on 5th March 1921

Other Information - Dates: This image seems to have been taken at the 'Gallop behind the Fort' competition held on 5th March 1921 according to Bell's diary for this date. Lhalu Mansion can be seen in the background [MS 25/6/2004]