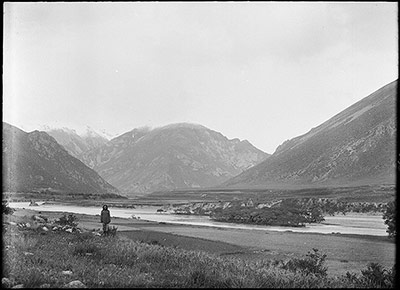 Man standing in foreground with a wide vally and river behind.

Other Information - Setting: At the end of August Sir Charles Bell and Robert Kennedy went on a tour of the country north of Lhasa to Reting monastery. This photograph was probably taken on this trip [MS 17/9/2004]

Other Information - Setting: Bell's Diary for September 1st 1921:"Kennedy and I rode on the main valley of the Re-ting Tsang-po (Kyi Chu) for about seven miles. A mile or two after leaving Re-ting, we cross a stream coming down a valley on the left. At the head of this is a Pass known as "The Black Pass". Shesur says Passes when difficult are sometimes called Black." [Diary Vol. XII, p.55]