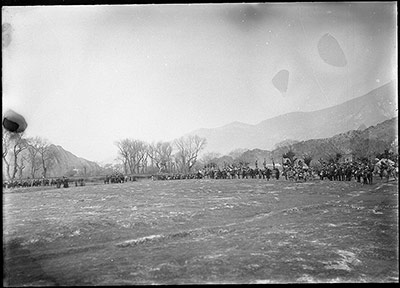 Horsemen on the outskirts of Lhasa assembled for festivities associated with the new year, probably the Gallop behind the Fort or Dzonggyap Shambe

Other Information - Dates: This image would probably have been taken on either the 1st March 1921 (The Preparation of the Camp at Lugu), 2nd of March 1921(Account of Trapchi ceremonies in plain between Lhasa and Sera) or 5th March 1921 (Dzonggyap Shambe competition held near the Lhalu mansion), according to Bell's diaries. However, given that Bell describes it as taking place on the outskirts of Lhasa, the festival is probably that of Dzonggyap Shambe [MS 23/6/2004]