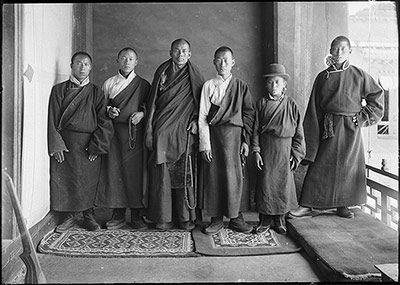 Group of six men, three of whom are in monk's robes and holding rosary beads. Standing in a covered balcony with carpets and low seating

Manual Catalogues - Bell's hand-written List of Illustrations entry for H.335 (nb: this is different to the caption for H.335 that appears in his section on 'The Religion', which is incorrectly annotated): "[No. of chapter] LXI. [Subject of Chapter] Monasteries and Monks [Subject of Illustration] H.335 (m) Group of monks. [Remarks] L.285"

Other Information - People: Only the three men holding rosaries are likely to be Gelukpa monks. They could be from the Namgyal monastery within the Potala or from one of the major monastic centres around Lhasa, such as Sera or Drepung [CH, 03/04/2000]