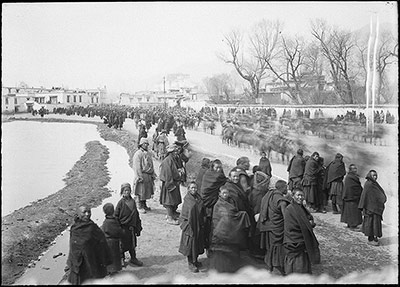 Crowd watching a procession in Lhasa. Potala can be faintly seen in the far distance

Other Information - Setting: This image may be of the Chipgyu Chenmo procession when the Dalai Lama moved to his summer residence in the Norbu Lingka. The quality of the image may be explained by the conditions under which it was taken. At the Dalai Lama’s request Bell had some photographs taken of the procession by Rabden, but taking place in the early morning it meant that the light was too weak to produce good results [Sir Charles Bell's Diary Vol. IX, pp. 29-31]. However, in a related image [1998.285.429] Bell describes this as being of crowds watching a procession after the Torgya festival, in which case it would be dated to 3rd March 1921. In neither case would Bell himself have been at this spot to take the photographs [MS 23/02/2006]