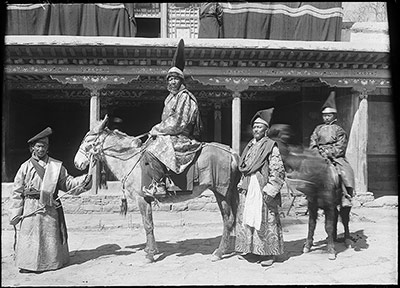 Head of Ladakh (Lopchak) Mission to Lhasa, Khan Sahib Faizalla, and his son, mounted on horse. Two attendants. Ornate brocade robes. In front of building with carved and painted earves and ceiling.

Other Information - Dates: The date of March 1921 has been given for this image as it seems to relate to 1998.285.323.1 which is detailed in Bell's List of Illustrations as having been taken in March 1921. His Diary does not mention the taking of this image, and it was most likely taken by Rabden Lepcha, probably under a separate arrangement by which Rabden would visit the mission with the express purpose of taking photographs [MS 23/02/2006]