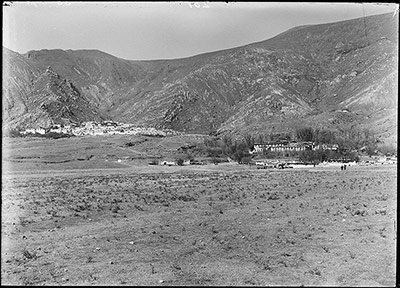 Other Information - Historical background: During Bell's time in Lhasa in 1920-21, there was a lot of tension between the Tibetan Government and the monks of Drepung Monastery, which led to the government sending 3,000 troops to besiege the monastery. Sir Charles Bell made the following comments about the situation, and the prospects of his being asked to intervene, in his Diary of 8th September. On this day he was travelling on a tour north of Lhasa, and fell into conversation with Kusho Palhese on the matter of the Drepung Monastery disturbances:" Per Palhese ... "The T[ibetan] G[overnment] seem clearly to have gained the upper hand over Dre-pung. They demand that the ring leaders [Tibetan script] be given up; they will, I think, put these to death as a warning to others. The parties sent out in search of these, give notice to the villagers, as they pass through. The villagers have to scour the mountains (lit. peel the mountains) [ ri-shu Tibetan script] in search of the men. It is their duty to do this work; it is in effect a part of their rent, or, if they fail in it, they are liable to be punished by their Jong-pens . I think, however, that the ring-leaders are still hiding in Dre-pung and will, later on, make a bolt for India or Bhutan. // The Dre-pung monks, are I hear, regarding the soldiers, who are surrounding the monastery, as a show. They come out and look at them, and offer no resistance. If the ring-leaders can be got rid of, they will profess innocence. ... They are probably hiding the rifles they are believed to possess. for 6 or 7 years ago they gave a letter to say that they had no rifles. So they hadly dare now admit the possession of them. They will either hide them underground below the monastery itself or in the hill-side close to, so as to be able to obtain possession of them when required." [End of reported speech of Palhese]// I have arranged with Palhese, that, if the Dre-pung monks ask me to intervene, my orderlies will not admit them direct to me, but will refer them to Palhese as he is the man who arranges all my interviews for me according to my rule since I first came to Lhasa. This will both postpone my reply and enable a suitable reply to be framed. Meanwhile the T[ibetan] G[overnment] may settle the matter and the date of my departure from Lhasa will draw nearer. The proper course seems to be as far as possible to avoid offending either the T[ibetan] G[overnment] or Dre-pung, and at the same time to avoid being drawn into the affair. It is rather hard to reconcile all three contingencies." [Diary Vol. XII, pp.81-83]