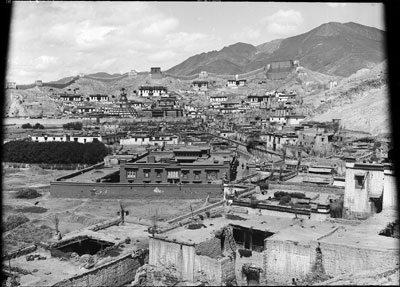 Gyantse town, with monastery and chorten in background.

In Negative - There appears to have been an attempt to re-touch the image on this negative by the use of transparent film or mask and rubbing of the emulsion. This has not been achieved successfully and presents flaws in the print [MS 9/6/2004]

Other Information - Dates: This photograph was probably taken in the later years of Bell's career in the region, maybe even in 1920 when he was in Gyantse collecting information for his books and awaiting permission to go to Lhasa. This is suggested by the manner in which the plate has been developed and the type of plate. However, Bell was in Gyantse on many occasions throughout his career in the region and a precise dating is not possible [MS 23/9/2004]