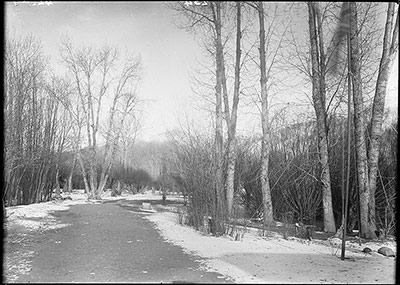 Other Information - Cultural background: Bell's Diary entry for 9th June:"There are two kinds of poplar trees in Lhasa; one like the kind at Gyantse; the other different to any poplar in Gyantse, the Chumbi Valley or Sikkim. The wood of the second kind somewhat resembles that of the poplar in Sikkim and the Chumbi Valley but the leaves are smaller and shaped more like the leaves of a maple. This kind is called "White Poplar" ( ja - kar ) [Tibetan script] in Lhasa. // It is used for house pillars, though soft, because it is easily carved with the designs appropriate to such pillars. Neto Jongpen thinks it is indigenous to Tibet, for he says the wood is rather poor and it would not have been worthwhile to introduce it from China or elsewhere. I do not remember to have seen it anywhere in India." [Diary Vol. XI., p.1]